A lot happens in six months: I’ve been honing a trade (mask & gear making). My housemate and I adopted two puppies. I’ve wrestled on the independent circuit.

And the whole time I’ve been training my ass off at Arena Mexico three days per week, with two different coaches, all with the explicit goal to work for CMLL one day.

Shortly after I began training at Arena Mexico, I started getting called into the CMLL office. Not in the “you’ve been misbehaving and need to see the principal” sort of way. But rather in the “You’ve caught the attention of your coaches and peers, and the programming team would like to speak with you” sort of way.

It started with a “Do you have promo pics?” meeting. Then came a second “So, how long do you plan to be here?” meeting. And then a third, much more exciting meeting.

A quick note about visas: I entered Mexico in May on a tourist visa, which was good for up to 6 months. That effectively gave me a countdown timer for the game plan “Train with CMLL, get seen, see if they’ll hire me. Lather, rinse, repeat as necessary.” The catch? You can’t work on a tourist visa. It’s illegal. Foreign citizens need a specific visa to legally work in Mexico. The next catch? To get a Mexican work visa you usually need a job offer from a Mexican company. When I showed up, I had neither.

At that third CMLL office meeting, I was asked for a copy of my passport. The reason? So they could put in an application on my behalf for a Mexican work visa. They were extending me a job offer.

That was early August. Then three weeks went by waiting for the visa application to process. Three agonizing, molasses-slow weeks. Three weeks of keeping my nose to the grindstone, but wondering all the while what my fate was to be. Then, on August 27, I got a text message from the office. “We’ve been notified that your work visa application has been approved by the Mexican Government. Can you come in today to schedule your consulate meeting back in the US?” After a manic happy dance around the house, I finished my breakfast, went to the gym, then got my butt to the CMLL office.

At the start of that meeting I was handed two items: a copy of my visa approval letter, and a copy of the magazine Box y Lucha from that very same day. My office contact said to take a look at the magazine. Inside I found some not exactly pleasant news: the nickname “La Avispa” is currently being used by a female pro boxer in here Mexico. I couldn’t use it with CMLL.

My mind went into immediate overdrive. Was I going to have to part ways with a name I’ve used for the last 7 years?

Basically since day one training at Arena Mexico I started getting questions from coaches and peers along the lines of “what if you get in and the company wants you to take a different name…? Change your gear…? Wrestle without a mask…?” and so on. It’s a not uncommon occurrence, especially where issues of intellectual property rights and copyrighted ring names are concerned. So needless to say, I started formulating a variety of contingency plans as soon as folks started bringing those possibilities up. I won’t say I was entirely emotionally prepared to be told that I couldn’t use my own carefully chosen name in CMLL, but at minimum I wasn’t totally blindsided when the news hit.

I got my visa appointment date set and I started preparing for a brief trip back to Seattle the next week (To put that part of the saga in a nutshell: I successfully went back to the US to get my temporary work visa, I’m now wrapping up procedures with the Mexican immigration office to get my year-long work permit finalized, and barring death or destruction I’m all set to work as far as the Mexican Government is concerned). Then I headed back to the office to talk about the issue of which name I’d use with CMLL. I wasn’t expecting Francisco Alonso Lutteroth (the owner of CMLL) to be in attendance.

We all sat down, and he said “So, we’ve got a problem with your name.” I let him know I’d been appraised of the situation. Someone else on the programming team pulled out my promo shots, and he pondered them for a second.

“Have you thought about any other name you might want to use?” I told him that ideally I’d like to stay in the same wasp theme, and pitched the handful of alternatives I’d thought up.

He nodded and gestured to the photo. Or rather, he gestured at the rather large wasp tattooed on the right side of my ribcage and said, smiling, “Yes, you’d be able change gear with a new name, but it’d be pretty hard to change that. We’ll see what we can do to get you something as close as possible.” 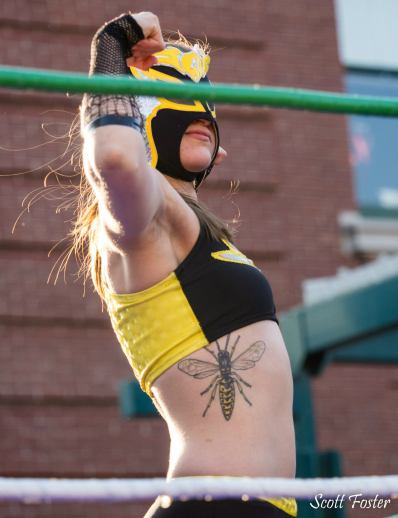 The tattoo in question.

That’s about as favorable of an outcome as I could have imagined for a meeting that could have drastically changed my professional identity. I left the meeting reassured, though still wondering what name I’d be using.

If you’ve been following my social media, you know how this story ends.

Flash forward to the week before last. Another text message bearing news from the office. The name I pitched as my first choice had been approved: La Avispa Dorada. Cue mini happy dance. It’s close enough that I don’t have to change my gear, my mask, or my mannerisms. It’s different enough to avoid intellectual property rights issues.

And that, kids, is how a tattoo saved my name. I’ve never been so thankful that I wear my figurative heart tattooed on my ribcage, putting my character out for the world to see any time I’ve got less than a full-length shirt on. Thanks to some ink (1) I’m still the same bug, just with more bling.

After the work visa and name were settled, there remained one last domino to fall: when would I have my first match with CMLL? Happily, I didn’t have to wait long to find out.

I wrote the bulk of this post before my official CMLL debut date had been set. Now, I can proudly announce that I’ll make my first appearance for CMLL at the Cathedral of Lucha Libre itself, Arena México, on Friday, October 5th.

2 responses to “Same Bug, More Bling: How A Tattoo Saved My Name, and the Lead-up to my CMLL Debut”

My name is Avispa (Now Avispa Dorada in CMLL). I was trained and performed at Lucha Libre Volcánica 2011 to 2018. I've been living in Mexico City since May 2018, and made my debut with the Consejo Mundial de Lucha Libre in October of 2018. When I'm not in the ring, I'm the head creator at Awkward Bug Studios where I make lucha libre & pro wrestling gear. I'm also an ACSM-certified personal trainer, and dedicated gym junkie. Do you love my work? Please consider subscribing to my Patreon page, and follow my adventures in the ring, the gym, and the workshop!